Summer is now well underway here in Japan, and I’ve had a chance to see what it’s like. Before we get too much further through it, I thought I’d talk about some of the more idiosyncratic experiences you get in these parts.

I had known some of what to expect, of course. I had been told that it would be hot, and I had been told there would be a rainy season. Both of these predictions proved completely accurate, but I often find that it’s one thing to be told about something and another to experience it for oneself. In this particular case the heat and humidity have been quite something. The daily temperature has been peaking in the mid 30s so far, which makes staying cool a major preoccupation. I’m starting to see now how air-conditioning isn’t a luxury in these climates, and in fact is almost essential if you want to carry on in anything approaching comfort. Working outdoors in these conditions must be pretty hellish.

The Japanese themselves recognize this, and have adopted several ways to keep cool. One of them is to use all the senses – traditional glass Japanese wind chimes, for example, make a sound that is regarded as cooling. It’s certainly pleasant, but I don’t know if it actually makes me feel any cooler.
Listening to the sound of wind or dining on the river are also thought to make you feel cooler, but the Japanese have other ideas too.

One of them involves scaring yourself silly. Being afraid really does make you feel cooler, even if only briefly, so ghost stories are a traditional summer activity around here. Haunted houses are also popular attractions at summer festivals. I’m ashamed to admit it, but I had never been into a haunted house before. They aren’t such a thing at New Zealand fairs, and I didn’t go to all that many anyway. But when I visited a summer festival at a nearby city I saw my chance.

In it, I encountered the friendliest ghost I ever expect to meet. She was so still at first that I thought she was simply a piece of spooky decoration, but when she leapt forward crying out… well, a foreigner screamed that day. She more than made up for the fright, however. Having resumed her position she then proceeded to wave and call out “Hallo!” in a pleased yet slightly nervous voice – perhaps she didn’t encounter many foreigners – and then waved and said “See you!” in exactly the same tones. I get the feeling that I might not have been the most excited person in the chamber. The friendly ghost, who has been provisionally named “Mitsuko”, will forever be the face of Japanese haunted houses for me.

Another summer tradition is “suika wari”, or the time-honoured process of hitting watermelons with sticks before eating the tasty innards. It turns out there official rules for this (because of course there are, this is Japan after all). According to the Japan Suika Wari Association there is a regulation distance the player must begin from the watermelon, only officially-sanctioned blindfolds can be used, the stick has very specific permissable dimensions, and so on. Amusingly, it is required that judges must have eaten not less than ten watermelons in the preceding calendar year – no surprise that the JSWA was the brainchild of the Japan Agricultural Cooperative.

Even assuming you’re some wild-eyed renegade not following the JSWA regulations, however, watermelons are very much the traditional summer fruit in Japan. They’re popular with practically everyone… which brings us to the title of the article. 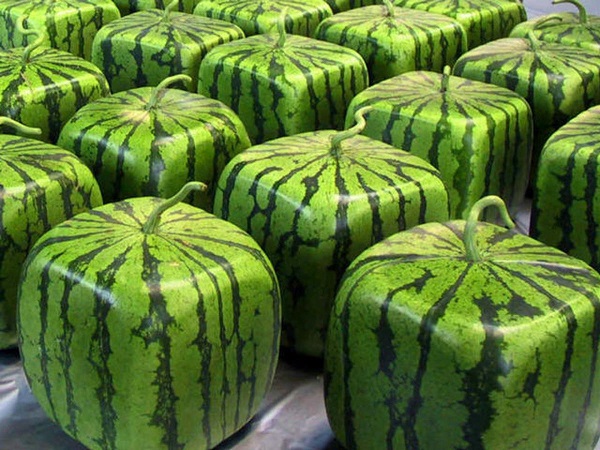 You can get square watermelons in Japan (they stack better). And mobile watermelon coolers, too. Watermelons are a big deal here.

The school I teach at has some preschoolers there, among others, and one particular four-year-old boy really likes watermelons. Really, REALLY likes them. One day one of the teachers brought a watermelon to school, and it wasn’t long before Rikuto found out about it. Once he did he kept on sneaking out of class and down the corridor to the kitchen to see it. He could inevitably be found sitting on the floor in front of the watermelon, rocking it gently back and forth in its bag with what can only be described as a look of awe on his face.

The cutting of the watermelon and its distribution to the students was of course a very big deal, an event greeted with great pleasure by one and all. But it was a big watermelon, and preschoolers are only small, so half of it was wrapped in clear plastic and stored in the kitchen fridge. And this is what gave rise to the watermelon watchers.

Rikuto and a group of other small boys formed a deputation to ask if they could see the watermelon. And so, for the rest of the week, at lunchtime they would form an orderly group by the door to the classroom. If they had been very good that day, one of the teachers would escort them down to the kitchen and open the fridge door for them. They would stand there for a few minutes, gazing at the watermelon with all due solemnity, and then she would close the fridge door and they would all troop back to the classroom for their after-lunch nap. I found it all absolutely hilarious, but everyone involved appeared to take it extremely seriously. I guess they are pretty special, though.

The watermelons, I mean.

Question of the Post: What summer traditions are there where you live?

I’m a New Zealander, in my 30s, and until recently I lived in rural Japan. I have interests in history, pop culture, video games, and the clever use of language.
View all posts by Dr. J.H. Watson →
This entry was posted in Japan and tagged Ehime, Japan, Life in Japan. Bookmark the permalink.

9 Responses to The Watermelon Watchers