Having talked previously about convenience-store foods in Japan, now it’s time to turn to the drinks that accompany them. No, I’m not talking about alcohol (although you can get that at the konbini easily enough). These are the drinks you might see and grab on a hot day, and common enough around here that you can find them pretty much anywhere. Including in vending machines, and if you want a better look at that side of things (including more detailed descriptions of some of the drinks I mention below) you could also check out this. 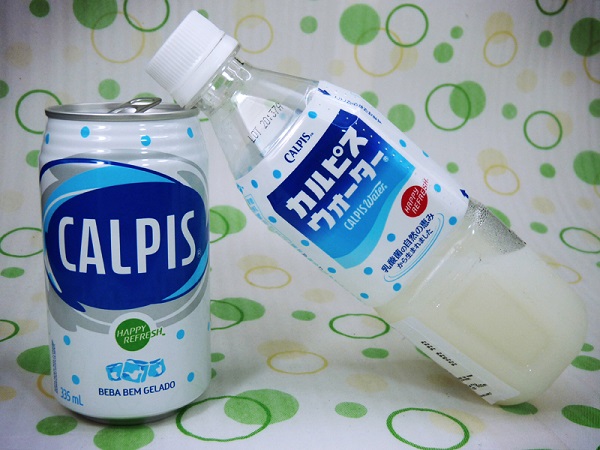 Calpis:
Calpis is one of those drinks that a lot of people outside of Japan have heard of, mostly because of the name. It tastes like a fruit drink of some sort and (in language that would please my high-school chemistry teacher) it is a pale white opaque liquid. Really it resembles nothing so much as low-fat milk. Which shouldn’t be a surprise, because it turns out that’s pretty much what it is.
In terms of taste… well, if you’re from New Zealand you probably know what Raro (the cheap packet powdered soft-drink) tastes like. If I say it’s like Raro without the sharpness of taste, you’ll have a pretty accurate idea. If you’re not from NZ then that might not mean much to you, so let’s just say that it’s a sweet drink with a generically-fruity taste and leave it at that. Personally I don’t mind it, but I wouldn’t seek it out. Adequate.

Lemon & Mint Pepsi:
Japan loves limited edition soft drinks. Seemingly every season brings some new addition to the shelves of the local konbini. When I saw this flavor on one of my recent visits my first thought was “How could this possibly go right?”, but I knew I had to give it a try.
Oddly enough it isn’t actually too bad. The lemon flavor is present but subtle. The mint flavor is more dominating, but the combination still manages to avoid overpowering the drink as a whole – if you like lemon & mint generally, this might turn out quite refreshing. Just keep in mind it is a diet soft drink, and if you don’t like artificial sweeteners – like yours truly – it won’t do you any favours. Adequate.

POM Orange Juice:
I’ve mentioned previously that Ehime prefecture is very proud of its citrus fruits. POM is one of the reasons I think that pride is fully justified. It is orange juice – or mikan juice, to be exact – and a very good example of that. In New Zealand something like this would attract a premium price and a label which claims to be made from the tears of the purest oranges, burnished by the sun in ways the gods themselves could only dream of, et-sickening-cetera. Here in Ehime it is basic, standard configuration orange juice and not remotely unusual. Japan in general does a really good job with juices of all types, and this is no exception. Highly recommended.

Rainbow Mountain Coffee:
Suntory coffee has had what I presume is a stroke of marketing genius by getting Tommy Lee Jones to front the advertisements for their coffees as he learns something about the planet (and Japan in particular). I can only imagine that this is meant to provide some cachet for the image of the coffee, I desperately hope it doesn’t enhance the flavor. Rainbow Mountain is an espresso blend canned coffee, and it tastes… well, pretty much how you’d expect. It’ll keep you awake and it’s by no means bad, but if you’re an alien expecting a transcendental experience from your coffee you should probably try something different. Acceptable. 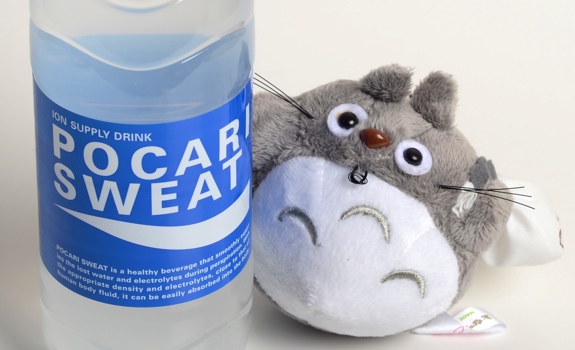 Pocari Sweat:
I have to admit the name mystified me at first. What precisely a pocari was, or why its sweat should be considered desirable to drink, were added to the list of unanswered questions about Japan. Not that it matters much, because Pocari Sweat is to all intents and purposes a sports drink. Although not as sweet as other sports drinks it has a vaguely fruity flavor, and is meant to be good for replacing ions, electrolytes, and other similar things. This is actually relevant outside the sports arena, you can sweat a lot during a Japanese summer and dehydration is no joke at all. Personally I wouldn’t drink it for the taste alone, but I’m glad it – or equivalents – are widely available in vending machines. Recommended. 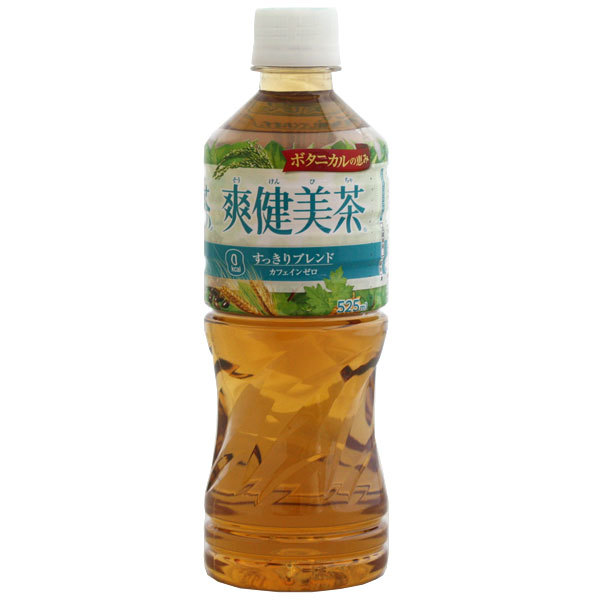 Mugicha (barley tea):
I come from a country where pretty much all soft drinks taste sweet, so this took a bit of getting used to. Not that it’s bad by any means, just that when I drink something with barley in it it’s usually beer, so some mental adjustments were required. But the British Empire was founded on cups of tea (quite literally, brewing tea cut down losses due to water-borne diseases substantially) so I was prepared to give it a try. Billions of people swear by tea in hot weather, after all.
And you know what? They’re right. This genuinely is a thirst-quenching drink. I can’t honestly say that I like the taste, but you get used to it fairly quickly, and it goes down very easily when the temperature is heading for the high thirties. For drinking pleasure I would still prefer the POM or something, but in practical terms I remember plenty of marches when I would have committed grievous bodily harm for a chilled jug of something like this. Definitely give this a try on a hot day. Acceptable. 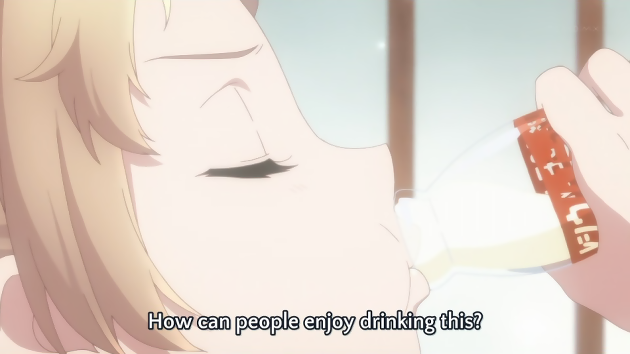 Question of the post: What are the local common drinks where you live? Which would you recommend to a visitor?

I’m a New Zealander, in my 30s, and until recently I lived in rural Japan. I have interests in history, pop culture, video games, and the clever use of language.
View all posts by Dr. J.H. Watson →
This entry was posted in Japan and tagged Japan, Japanese drinks, Life in Japan. Bookmark the permalink.

4 Responses to Tastes of Japan Pt 2