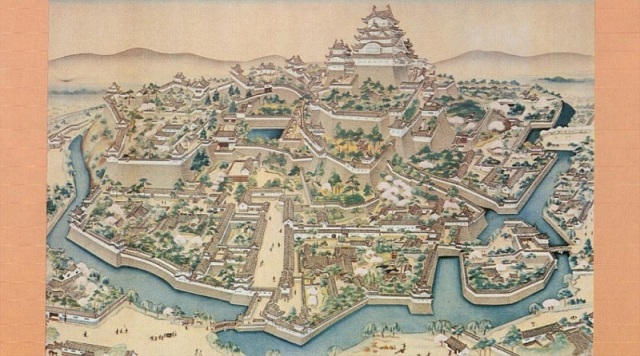 Ever since I arrived in Japan I was interested in Japanese castles. They look quite different to the stone fortifications my Euro-centric upbringing made me consider normal, and it took me a while to realise that it was because they were doing different jobs. Just in case there’s anyone else out there in the same situation, here is Watson’s primer on Japanese castles. 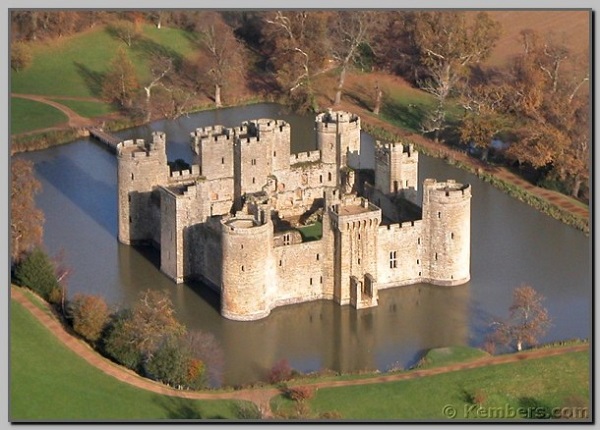 Bodiam castle, East Sussex. Note how the castle is a compact, regular shape placed on the terrain.

First, let’s establish a baseline: the European-style castles that many of us are familiar with. These were not exclusively military structures, since they also functioned as the lord’s residence and an administrative centre, but their role as a fortification was paramount. In their classic form they featured high stone walls between circular towers, all surrounding a central inner keep and with a moat as the outermost obstacle. Attacking such a castle was not a straightforward affair. In the absence of conveniently-placed traitors who could simply let one in, an attacking army had four main options.

First, and quickest, was to construct a bunch of scaling ladders and attempt to storm the castle. If the defenders were even minimally competent this guaranteed high casualties for the attackers, but under the right circumstances it could (and did) work. This was also the only option that could be carried out fast. If the invaders could somehow get tactical surprise, a hasty attack had the chance of dealing with a castle quickly and relatively simply. Needless to say this was not easy to achieve.

If the low odds of successfully storming a castle put an attacker off, they could also try to do something about the walls before sending in the troops. Siege engines such as trebuchet or battering rams could make a breach in the defences, while siege towers made it easier for troops to cross the walls. Castles were designed to resist such devices, however, and it took time to make them and bring them into action. A more subtle approach was mining – digging tunnels under the walls to make them collapse. Competent defenders would be alert for this and employ countermining teams, which led to desperate knife-work in the blackness beneath the earth. This was also a very slow process to implement. 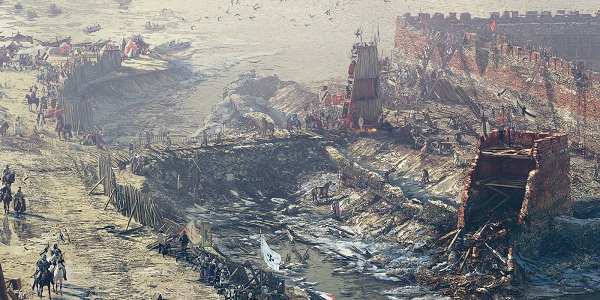 The third option was to simply set up camp around the castle and wait for them to give up. Castles had large stores of food and supplies, and usually had a water source within the walls. But the defenders ability to hold out could be reduced by lobbing blazing firebrands inside to burn anything important, or corpses (ideally diseased) to spread sickness. Unfortunately disease was also a problem for the besieging army, who also had to cope with living off a hostile landscape for as long as it took for the defenders to give up. It was a battle against time before cholera and dysentery rendered the attacking army unable to defend itself, and while sieges were successfully conducted it was generally a lengthy and painful business.

The fourth option of course was to look at the castle, decide it was too difficult to deal with, and just walk away. This outcome was exactly what castles were intended to achieve, militarily speaking, and they did a fairly good job of it until gunpowder weapons became powerful enough and widespread enough to make battering down their walls a practical proposition. Even then castles evolved, going lower and changing their geometry, and they reached their ultimate expression as fortifications in the star-fort designs of the 16th and 17th centuries. The advent of plunging fire from gunpowder weapons in the 18th century along with the introduction of high explosives in the 19th spelt the end of such structures, although it took a lot longer for people to give up on them.

With all this at the back of our minds, now let’s turn to Japanese castles.

Matsuyama castle, Ehime prefecture. Note how the castle is adapted to the shape of the hill.

All of the Japanese castles that still exist today date from the 16th century onwards, so those are the type I will be talking about. Exceptions exist to the principles I’ll be discussing, but the general case holds up for most examples you might see.

The first thing you notice is the layout of the castle and its grounds. Most are built on top of a hill, and Japanese builders saw no sense in ignoring any natural defences that were conveniently to hand so the local landscape played a key role in shaping their design. As you go towards the castle, you’ll encounter a moat. Bridges over this were permanent, which channelled all but the most determined attackers towards gaps in the earth berm on the other side. Inside this berm was the outermost grounds of the castle, the san-no-maru. Commoners who worked in the castle might have accommodation there, but there also a variety of shops, exercise grounds, warehouses, armouries, drinking establishments, gardens, and so on. This was effectively a small town, containing housing and facilities for the local lord’s samurai and retainers.

After you reach the base of the hill you will encounter the first stone walls. These are probably only of moderate seriousness as defences, and enclose the ni-no-maru. This is where the lord and his most valued advisors lived and carried out their administrative functions. The area often contained a garden as well as at least one tea house, a ­noh theatre and other cultural facilities. These were not luxuries! Being able to provide suitable accommodation and entertainment to distinguished visitors was an essential aspect of etiquette. Samurai were considerably more than simply skilled fighters.

Upon leaving or skirting the ­ni-no-maru you will have to climb the hill the castle is built on. The paths were usually paved with large but irregularly shaped stones, making progress easy but not necessarily fast. Even the main paths had many turns and switchbacks as they made their way higher, and eventually they would reach the curved stone base of the castle. Upon this stood the main defences of the castle, the honmaru.

Osaka Castle, Osaka. Where there wasn’t a suitable terrain feature to take advantage of, the builders would make one.

This area was the defensive heart of the castle, and had a distinctively different look. Stone bases curve smoothly up towards their wooden walls pocked with arrow and gun slits, while winding pathways with abrupt direction changes and many gates form the only access routes to the central buildings. The buildings here had utilitarian purposes – storehouses, wells, magazines and accommodation for those taking refuge within. Both the turrets on the walls and the main tower have tiled roofs and featured characteristic ornamentation. Their structure is also different; while they had a stone base they were constructed mainly of wood.

The first reaction of most people hearing that is to frown and say “Doesn’t wood burn?”
And the answer is yes, it does. Especially when the castle is built on the highest point around and thus a magnet for lightning strikes. Japanese castles usually had ornamental shachihoko (mythical fish creatures) fitted to their roofs to protect them from fire, but historical evidence indicates they didn’t work very well. Reading the history of a castle is basically a matter of waiting for the bit where it says “… destroyed by fire in 16-something-something”. One would think that a wooden castle, no matter how many fish it had, would be a bonfire waiting to happen if the attackers were willing to use fire as a weapon.

But one would be wrong. The key to this puzzle is that Japanese castles existed in a different strategic and tactical environment than European castles.

Tactically, castles were seldom deliberately destroyed by attackers. The reasons for this were varied, but the results were the same: siege warfare, both in terms of techniques and equipment, was rarely employed and not very highly developed. The primary military threat to a castle was therefore assault. Castles in Japan were skilfully designed to make this as difficult and costly as possible. Gates, usually a tactical weakness, were turned into a strength. They led attackers on a circuitous route of choke-points and enfilades, creating an “aisle of values” that invaders were forced to pass through. These winding access routes led to a defense in depth of small courtyards covered by overlapping fields of fire, the sloping bases made it difficult to get ladders close to the walls, and the dedicated use of terrain features was also an essential component of the overall defensive scheme.

And strategically, castles were not simply defensive fortifications. Nor were they homes for the local lord. Most lords lived close to them or had their official buildings on the grounds somewhere, and there were exceptions to this (such as Kochi castle), but for the most part they were not residences or administrative centres. Instead, as the Edo period went on, castles in Japan became to an increasingly greater extent symbols. They were symbols of the lord’s capacity to mobilise and support military force, but they were also symbols of other things: wealth, power, influence, and even aesthetic appreciation. Apart from anything else they were also often given as gifts to favoured retainers (another reason destroying a castle could end up being a costly mistake).

In this context, the architectural style of Japanese castles makes a good deal of sense. The utilitarian calculus that drove castle design was substantially different in Japan, and so of course it led to different outcomes. Some of the reasons castles were built were similar to those of Europe but others were not, and it is a mistake to try and judge each by the standards of the other.

These days of course the merits of castles come down essentially to personal preference. Castles are about as relevant to modern Japan as they are to modern Europe, and we are long past the days when they had value in any sense except the aesthetic or historical. But that value should not be discounted, and walking up to and through a castle can give a strong feeling of what was important to the people of the time.

Besides, they still look pretty cool.

Question of the post: Are there any distinctive historical architectural forms where you live? What do they tell us about the people who built them?