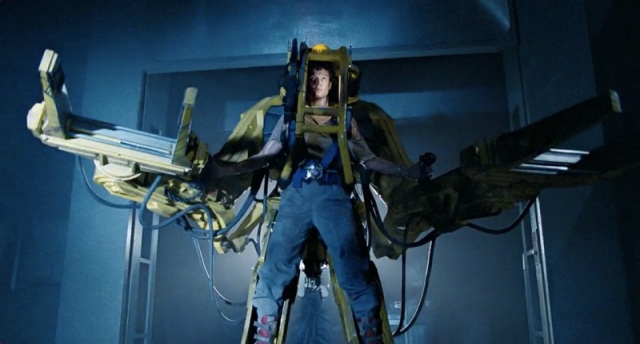 Here in Japan the rainy season has started, and if you live in a rural area – like yours truly – its effects are fairly obvious. What might be less obvious are the ways in which those effects have shaped not only Japan, but also the entire world, and are still doing so today. This will mean talking about a range of subjects, and those of you familiar with the literary technique known as foreshadowing have probably just realised you’re in for a lecture. 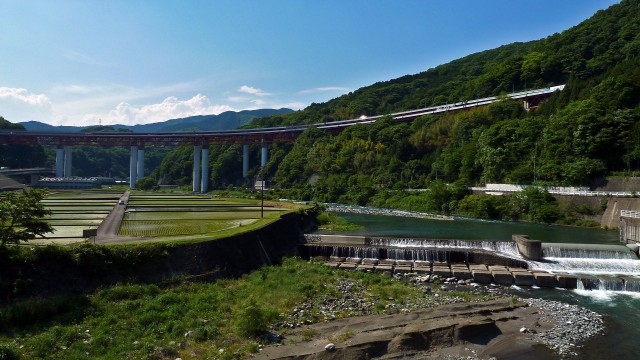 Click to have a look at the high-res version.

To get started, take a look at this picture. It’s pretty close to what I see when I go for a drive, and it’s full of things that rely on hydraulic power. The machinery is the least of it: yes, all those rice fields and irrigation canals have to be built and maintained somehow, although for centuries it was managed with muscle power. But one of the things that stuck out to me when I arrived in Japan was how all the watercourses seemed to be lined and directed. Every so often there are gates and sluices to control the flow of the water, and this isn’t solely because Japanese people love order.
The key to it all is water – rice needs a good deal of it to grow, and the areas it grows in are easily flooded during rainy season. Managing the supply of water, so that there’s enough of it, in the right places, at the right times, requires a good deal of work and preparation all year round. And this is what I mean by hydraulic power.

The importance of being able to engage in these sorts of serious irrigation projects is difficult to overstate. A society which can do it is rewarded with a stable and productive agricultural base which is much less vulnerable to flooding and the erosion of fertile land. More land becomes usable, for a greater part of the year, and the number of uses to which it can be put is increased. This is particularly important in deserts, of course, but it is also important for rice cultivation, and there are plenty of examples of cultures which benefited from it. 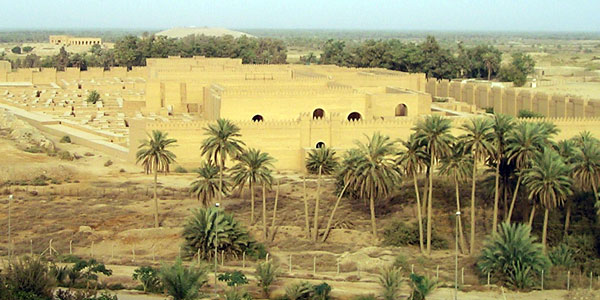 However, it’s a difficult business to engage in. An immense amount of organisation and planning has to be done to set up the system in the first place, and you need to keep on doing it every year. The physical labour of building and maintaining all the infrastructure necessary to keep it operating is also considerable. The sheer scale of the project is sufficient to defeat all but those societies which possess  the centralised coordination and the specialised bureaucracy required, and can sustain it for long enough reap the rewards.

Back in 1957, Karl August Wittfogel coined the term “hydraulic empire”. It refers to an empire which uses its control of irrigation to enforce its power in other areas too, and it gets that control through being the only organisation capable of conducting the work and maintenance required for the irrigation and flood control measures to exist at all.
I want to stress that I don’t think Wittfogel’s ideas can be applied fully to Japan. Frankly I have my doubts about the degree to which Wittfogel extends this idea, and if we start considering all the other factors involved in imperial domination I’m not sure it would continue to hold water. But the central points – that controlling the waterworks is very important; that it requires a lot of work and organisation; and that effort is a source of power for whoever does so – seem to be broadly true. 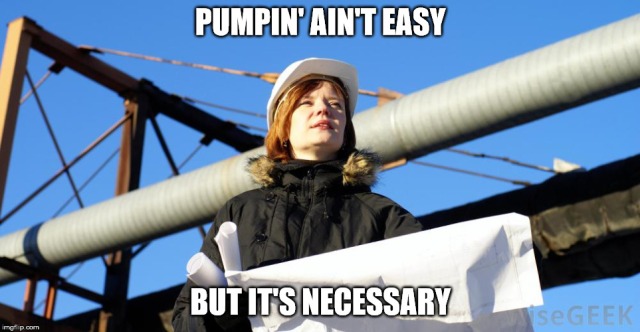 So far this might sound like a subject of historical interest only, but it’s actually still of considerable importance and will be for the foreseeable future. Human needs for food and the mitigation of natural disasters haven’t gone away, and while we are more easily capable of undertaking the work required in physical terms the organisation and record-keeping required are as much of a problem as ever. Perhaps more so, because these days projects with long-term value are increasingly hard to conduct. Politics and business tend to be focused on the next electoral cycle or the next quarterly report, and supplying and maintaining the infrastructure which makes all the other things possible is an unglamorous task despite its importance. When that work doesn’t get done, or in situations where it wasn’t started to begin with, you can have trouble. But you might even have trouble when you do a good job.

There’s the obvious kind of problems, where agriculture is less viable and flooding is a major issue. That’s caused by the absence or poor implementation of these hydraulic engineering schemes. More seriously you can also get political disputes escalating all the way up to armed conflict, and these usually come about when hydraulic engineering is working as intended.
Consider: fresh water is arguably as valuable as oil. It is used for agriculture, industry, sanitation and a multitude of other things in the daily life of any community. If one community has it and another does not, the first will thrive while the second withers. And if the second doesn’t have it because of something the first is doing… well, you can see the potential for conflicts. 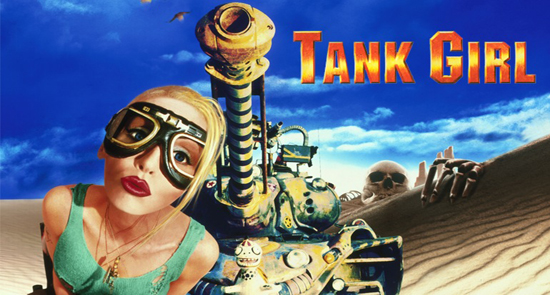 I’m not saying they’ll be as awesome as this, mind you.

Let me stress that this is not a subject of theoretical interest only. My postgrad studies were on international relations and security studies, and conflict over access to water was a major concern for many people in the field. A few examples might help show why this is the case.

The Middle East: Most of the fresh water for the Middle Eastern states comes from the Tigris and Euphrates rivers. Both of these originate in Turkey, which has recently been damming them. Syria and Iraq are both extremely vulnerable to interruptions to the flow of these rivers. Over on the Mediterranean coast, access to water in Palestinian communities is almost completely controlled by Israel.
Africa: Access to the waters of the Nile River is hotly contested between Ethiopia and Sudan (who control its headwaters) and Egypt (which currently gets over 90% of its water from the Nile). Access to water is a key cause of the Sudanese civil war. Armed clashes have erupted between Nigeria and Cameroon over who will have access to the dwindling water supply from Lake Chad.
America: The Colorado River is so heavily drawn from that it no longer reaches the sea. Over 90% of its water is taken by the seven US states it runs through before reaching Mexico. The Rio Grande is beginning to run dry also, leading to disputes between Mexico and the US over the supply of water to southern arid states. In South America, inadequate access to privatised water supplies has led to riots and a state of emergency in Bolivia.
Asia: The Indus River, which Pakistan depends on, has its headwaters in Indian territory. Pollution, flooding, and reducing water flow to Pakistan have all been traced to these sources. In Southeast Asia, the Mekong River is essential to Laos, Cambodia, Vietnam, and Thailand. However it rises from Southern China, which has increasingly been diverting the waters to support its own population’s desire for energy from hydroelectric sources. This also provides China with enormous geopolitical leverage over most of mainland Southeast Asia.

In a movie or TV show, this would be the time when someone comes up with an idea to solve the problems that have been talked about (ideally, one so crazy that it just might work). If you have one in mind then please tell us in the comments, but I certainly don’t. It’s a difficult situation, without much in the way of clear answers, and although we don’t yet know what climate change will do to all this we can bet that it won’t be good. I’m worried that it might all turn out to be a wicked problem. 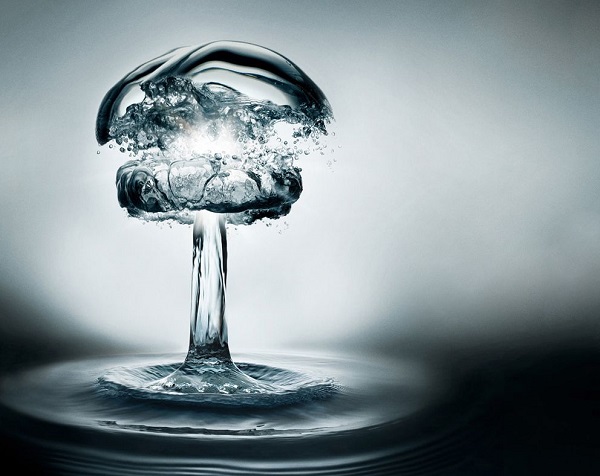 No jokes for this one. Think about how many of the countries I mentioned above have nukes.

Backing away from the difficult real-world issues, however, all of this provides fertile ground for writers of various types. Good world-building is like an ice-berg – most of it remains unseen, but it nonetheless shapes the bits that do. Conversely, the bits that get seen reflect the mass that supports them. A good writer can use these details to tell their audience a good deal about the world, without requiring a visit from Sir Basil Exposition or having characters descend into “As we all know, Bob…” speeches.

And of course, the same applies to the real world too. The next time you’re passing through the countryside, take a moment to look at the visible infrastructure that makes it all possible. Who builds it? Who maintains it? What does that tell you about how society is organised? Maybe you’ll discover your own version of hydraulic power.

Question of the post: How can an author best make use of the world-building they do? What’s your favourite example of this from fiction?

I’m a New Zealander, in my 30s, and until recently I lived in rural Japan. I have interests in history, pop culture, video games, and the clever use of language.
View all posts by Dr. J.H. Watson →
This entry was posted in History, Japan, writing and tagged Ehime, History, infrastructure, International Relations, Japan, Karl August Wittfogel, Life in Japan, Writing. Bookmark the permalink.